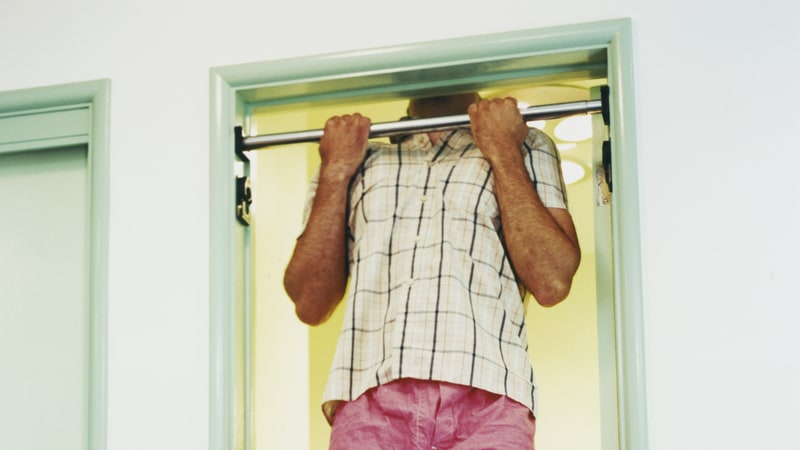 There are two inconvenient truths about pull-ups. One, they’re a standard marker of fitness. Two, just performing a single pull-up is extremely difficult without upper-body strength — making them a real pride-killer to practice at the gym. But it’s not impossible to master this tough exercise, and you don’t need a gym membership to learn it. As long as you have a pull-up bar and the tenacity to keep trying, you’ll be lifting your own body weight before you know it. Here’s how.

Nothing Preps You for a Pull-Up Like a Pull-Up

Anyone who’s spent months working on their lat pull-down and row strength only to discover they still can’t do a pull-up is bound to feel confused. Don’t these other exercises work the same general muscle groups? Well, yes and no. They certainly target the major muscles of the upper back, but the pull-up is unique in that it requires significant grip and core strength along with scapular control. Even assisted pull-ups don’t require the same full-body control and engagement as the real deal, so nothing can prep you for a pull-up like a pull-up.

That’s why the best possible modifications to help you nail your first pull-up are those that break down the full movement into bite-sized elements, developing strength through each part of the exercise so you can eventually piece them into a whole.

“If you can’t hold onto the bar, your pulling strength won’t really matter,” says Parker Condit, a personal trainer and the Program Director of the Performance Center at The Aspen Clinic in Colorado. One of the best ways to develop grip strength that translates naturally to your pull-up is a basic bar hang. And yes, it’s exactly what it sounds like — simply hang, with arms extended, from your pull-up bar.

But grip position is important, too. “You want all of your knuckles closest to your wrist to be pointing toward the ceiling when you’re hanging,” Condit says. It’s this position that engages your hands and forearms in the same position they’ll need to maintain while doing full pull-ups. Condit suggests doing three sets of hangs to failure (just hanging there until you can’t hang anymore), with one minute of rest between sets. Do this two to three times a week. Once you can perform three hangs for 60 seconds each, add weight to make the exercise harder by wearing a backpack full of heavy things from around the house.

Start With a Band or a Buddy

Band and buddy pull-ups are a great way to work through the full range of motion of the true pull-up, but with a little added assistance. Detric Smith, strength coach and owner of Results Performance Training, suggests starting with partner pull-ups if you have someone you can work with. Ask your partner to lightly hold your legs or hips to give you an extra push whenever you hit a sticking point. The trick is communication. Don’t let your partner give you too much help. The move should be challenging to complete.

If you don’t have a partner around, band pull-ups are a nice alternative because they’re an inexpensive way to mimic the gym’s assisted pull-up machine. Using extra-strong resistance bands, loop one band around your pull-up bar and string it through its own loop to “lock” it in place. Place a knee or foot inside the hanging loop, grasp the bar in a standard pull-up position, then perform a pull-up using the band’s elasticity to get you up to the bar. Just keep in mind that banded pull-ups don’t translate perfectly to true pull-ups, so while it’s a good way to acclimate your body to the feel of the exercise, you shouldn’t rely on them too heavily.

Perform three sets of band or buddy pull-ups to failure. Do as many reps as you can per set, even if you’re only doing singles. Allow one minute of rest between sets.

Negative pull-ups work you through the eccentric, or lengthening phase of the pull-up exercise. And because the eccentric phase works the same muscles as the concentric phase, just in the opposite direction, it’s a great way to develop pull-up strength without having to execute the “pulling” portion of the movement.

In theory, negatives look easy. Simply stand on a chair and position yourself at the top of the pull-up bar, your hands gripping the bar and your chin above it. Lift your feet from the chair and, in a slow, controlled fashion, extend your arms, lowering yourself to the bottom position of the pull-up.

When performed correctly, negatives are extremely taxing. Nick Collias, a Progressive Calisthenics trainer and a senior editor at Bodybuilding.com suggests doing three to five sets of three to five slow negatives, so each negative takes at least five seconds to perform. Add this series to your workout twice a week and it shouldn’t take long for you to transition to full pull-ups.

MORE: Which Is Better, Chin-Ups or Pull-Ups?

Every time you work on pull-ups, you need to actually try a pull-up. Collias suggests starting with a neutral grip, so your palms are facing each other. “You’re stronger in this grip than other grips,” Collias says, adding that it’s also easier on the shoulders.

The initial pull to lift your feet from the ground is often the first sticking point you’ll experience. Try to work past it for a second or two. If you can’t pull yourself up on your own, relax, then try again — but this time add a little hop to get past the first sticking point. Do as much of the pull-up as you can, then slowly lower yourself back down in a negative-like action.

It shouldn’t take long — between a few weeks and a few months — to see significant improvements in performance. Once you’re able to nail a single, full pull-up, work your way up to at least three sets of five or more reps.